My second taste of the Czech/Slovak music scene came courtesy of Pigs on the Wing, a Pink Floyd tribute band from Slovakia. Having seen the Australian Pink Floyd twice, I knew this was going to be a different kettle of fish altogether. Kettle of fish, what a phrase.

Anyhoo the gig was taking place in Ponorka, or “Submarine”, a small rock bar in the basement of a larger community building. We arrived about twenty minutes before the band were due to take the stage and had a quick beer in the lounge at the back. The band started to play as we were making our way back into the main venue and I was immediately struck by the vocalist’s uncanny ability to mimic Pink Floyd’s vocals. If you closed your eyes you’d swear you were at an early Floyd gig, he was that damn good.

The band had some sound problems after this initial opening song and went off stage to resolve this, so naturally the only thing to do was have a few more beers. When they returned to the stage the crowd had swelled to fill the room and were eager to hear the show.

A full house were there for Pigs on the Wing

The music was so chilled out, one guy sat down for the whole show 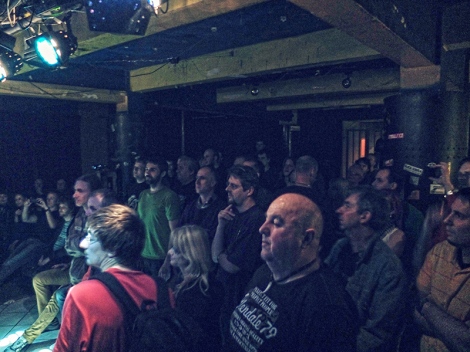 The crowd was quite mature, as you’d expect for this kind of gig.

As I mentioned earlier, if you closed your eyes, you’d swear you were at an early Pink Floyd gig. If you imagined you hadn’t heard this music before, or had the pleasure of hearing Pink Floyd’s music for the first time, this was a fascinating gig. Their music is so unique and timeless, and these guys played it so well, it was a really great show.

Pink Floyd are well known for their epic stage shows and for employing non “traditional” instruments or techniques that you’d usually not associate with rock music. Pigs on the Wing although a relatively unknown tribute band outside this region pulled out all the stops on their I assume limited budget.

They had a projector set up to the right of the stage showing some really cool visuals to accompany their set, along with audio of Stephen Hawking, that really tied everything together. They went so far as to have a saxophonist as well as a female backing singer to sing “that” bit from The Great Gig in the Sky, among others. All of these little touches were a fantastic addition, and added a real sense of authenticity to the performance. 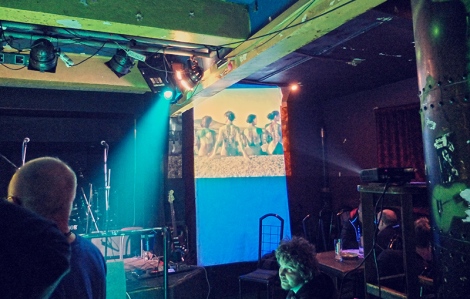 The projector added a fine visual element to the performance. 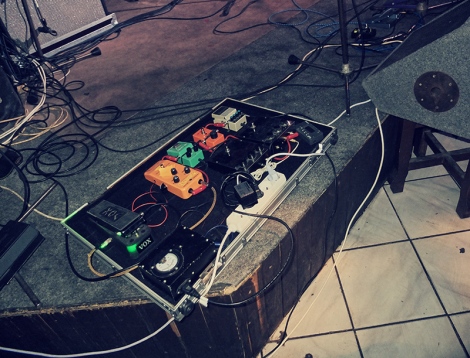 Guitar and saxophone sitting proudly together.

Waiting for another workout from the very talented Filip Sľúka.

Lead vocalist and bass player Martin Námešný, watches on as his guitarist works his magic.

The backing vocalist was an excellent addition to the line-up and hit all the high notes with aplomb.

Most tribute bands just play through the greatest hits, exactly as you’d hear them on the radio, but not these guys, each song would be more like a jam session with quite a lot of improvisation and drawn out instrumental sections, keeping the crowd on their toes, but still playing that recognisable Pink Floyd sound. The band members would smile to each other as they played and you got a real sense that they lived for this, it wasn’t just gig 56 out of 75 that year.

All in all it was really good show, as a Pink Floyd fan (Thanks Dad, you converted me eventually) I thoroughly enjoyed this Slovak band’s take on such a popular band. The musicianship, visuals and audio were all top quality and the attention to detail was superb. I’d highly recommend checking these guys out if you are in the Czech Republic/Slovakia and looking to get your Pink Floyd fix.

Apologies for the grainy shots, they were taken on my Fuji X10 (great little camera) which although a capable performer struggles a little at high ISO. Next time I’ll bring my SLR 🙂

PIGS ON THE WING